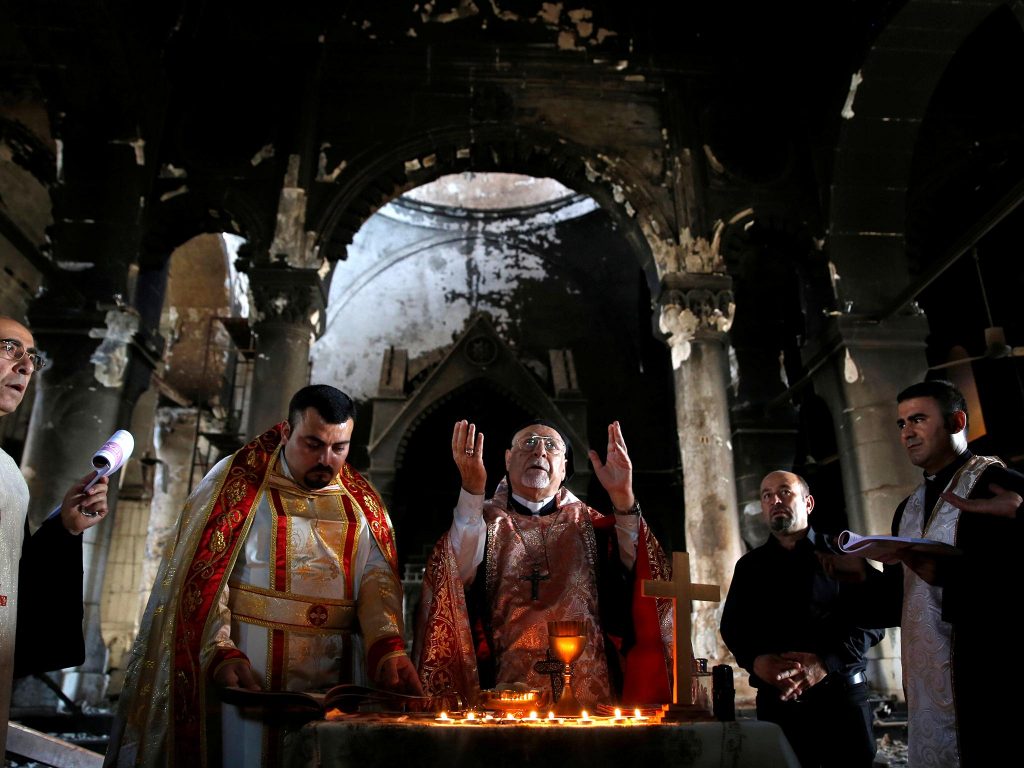 The persecution and resilience of the Christians of Iraq

Almost 250 years before Christianity was officially declared as the religion of the Byzantine Empire, Christianity was already prevalent and practiced in what is now modern-day Iraq since 50AD by the inhabitants. These were the first Christians of Iraq, who constituted the remaining population of ancient Mesopotamia: mainly Assyria in the north and Babylon in central Iraq.

These Christians spoke Aramaic, the language of Christ, and some of them continue to speak it until today. Contrary to public perception, Christians in Iraq do not only live in Baghdad and northern cities. They also live in the south-west and southern Iraq, in Basra and Amarrah, and in what was the ancient city of Babylon, in Central Iraq. Despite having their theological differences, both Orthodox and Catholic Christians remain an integral part of the constitution of Iraqi society.

Why then, are there now less than an estimated 500,000 Christians left in Iraq from a population which exceeded 1 million just 30 years ago?

In 1990 Saddam Hussein invaded Kuwait. He was then forced to withdraw after a US-led coalition of 33 countries defeated him, and destroyed Iraq’s infrastructure in the process: bridges, power stations, factories and even shelters were demolished. Following that, the USA pushed for economic sanctions on Iraq, cutting cash flow into the country, not only preventing the exportation of oil but even the importation of medicine and food.

Consequently, food prices soared, health care collapsed, and poverty spread even amongst professionals, to such an extent that a school teacher would use half of his monthly salary to buy his family a single box of 30 eggs. This devastation lasted for twelve years. The morale of people declined to record lows. Iraqis started to leave their country. Christians were amongst them, and that was the beginning of the first Christian emigration from Iraq.

In 2003, and after the American invasion of Iraq, the American civil governor of Iraq dismantled the security forces, without appointing an immediate replacement. Chaos broke out, and lawlessness spread. Criminals started to target professionals and businessmen, holding them for ransom. Doctors and university lecturers started to leave the country. Being a doctor and a Christian at that time meant you were particularly at risk. Several priests and Archbishops too were also kidnapped and killed.

These disastrous conditions were ideal for religious extremists. Initially originating from outside Iraq, these extremists came from countries such as Saudi Arabia to recruit and form a network of terrorists. Other religious groups would be targeted, initiating sectarian tensions. Eventually, this culminated in sectarian clashes on the streets of Baghdad in 2006. Official records stated there were at least 100 casualties per day. These clashes lasted for almost 18 months.

Christians were a prime target for those extremists. They had a ‘foreign’ ideology that they wanted to impose on Iraq. Their determination to implement this ideology which constituted a narrow-minded vision of governance brought them to the political vacuum that was Iraq. They had tried in Afghanistan, and in parts of Pakistan, and now it was Iraq’s turn. They resolved to cleanse Iraq from the ‘others’. These ‘others’ were, in essence, anyone and everyone who disagreed with them, including Christians.

On Sunday 1 August 2004, the first Church bombings took place. Five churches in Baghdad and Mosul were attacked with explosive-laden cars. This resulted in the second wave of Christian migration out of Iraq.

One of the worst assaults on Christians came on Sunday 31 October 2010, where terrorists attacked the ‘Lady of Salvation’ Church in the district of Karrada Baghdad. Worshippers attending mass were taken as hostages and ultimately massacred.

This, however, was incomparable to what happened in 2014.

Even after 3 years of continual conflict in Syria, the extremists who had travelled from many countries across the world, via Turkey to fight, had not exhausted themselves. The conflict had, in fact, ignited their thirst for murder and domination. Organisation and finance amongst their networks were stronger; they were now highly trained and had advanced weaponry. For these extremists the conditions were ideal. Their mission: defeat Syria and cause chaos in the bordering Iraqi city of Mosul.

Mosul had been a mess for years due to successive waves of mismanagement. In June 2014, armed extremists entered the city to declare a state of their own. This was the beginning of yet another dark chapter for Iraqis, and especially for Iraq’s Christians, most of whom were indigenous to Mosul and the surrounding areas.

Mosul is the capital of the Nineveh province. Ancient Nineveh was the capital of the Assyrian empire. It was amongst the first places that accepted Christianity in the first century AD outside of Jerusalem. For the first time since the first century AD, native Christians in Mosul were forced to leave their homes in 2014. Extremists marked their houses with the letter ‘N’, the first letter of the word ‘Nasara’, the Arabic term for Christian. The Christians were given three choices: change their religion, pay a special tax, or leave the city, leaving behind all their possessions. The Christians of Mosul decided their only choice was to leave their homes, thus resulting in the third wave of immigration.

But this time, the situation was different. Most of the Christian population proceeded to neighbouring Iraqi cities, namely Erbil in Iraqi Kurdistan. Many Christians also joined their fellow Iraqi brethren in the fight against extremism. Local Christian men mobilised to form the ‘Valley of Nineveh’ force, which then joined the Iraqi army. These forces, together with the Iraqi security forces, the Hashd popular mobilisation forces, the Peshmerga and the tribal mobilisation forces, united to liberate Iraq from the extremists.

In 1987, the national census estimated the population of Christians at 1.2 million. Today, the estimated population of Iraqi Christians has fallen to fewer than 500,000. Yet the followers of Christ are determined not to lose the connection with their homeland. Many are planning to go back once Mosul is completely liberated. Their homes need to be rebuilt. They have suffered for the last 30 years and they continue to suffer. Many have left, but those remaining are determined to continue the struggle and protect the identity of one of the most ancient religious communities in the world.

Christians in Iraq are proud of their religion. They are determined to adhere to their principles, and to defend the truth – no matter what the price. They have become accustomed to external forces attempting to take control of their lives and homes: from the days of the Persian empire and Roman empire fighting over dominance in Iraq, to modern day extremists imposing radical ideologies. Powers have changed and forces have come and gone, but the Christians of Iraq have persevered and remained steadfast.

It may come as no surprise then, on that fateful day of Ashura, one of Hussain ibn Ali’s supporters was an Iraqi Christian, Wahab, who, despite being newly married, chose to stand for truth and justice. Wahab, like everyone on that day, made a choice and paid the price. He gave up his life to defend the truth and left a legacy that has lasted for over a thousand years.