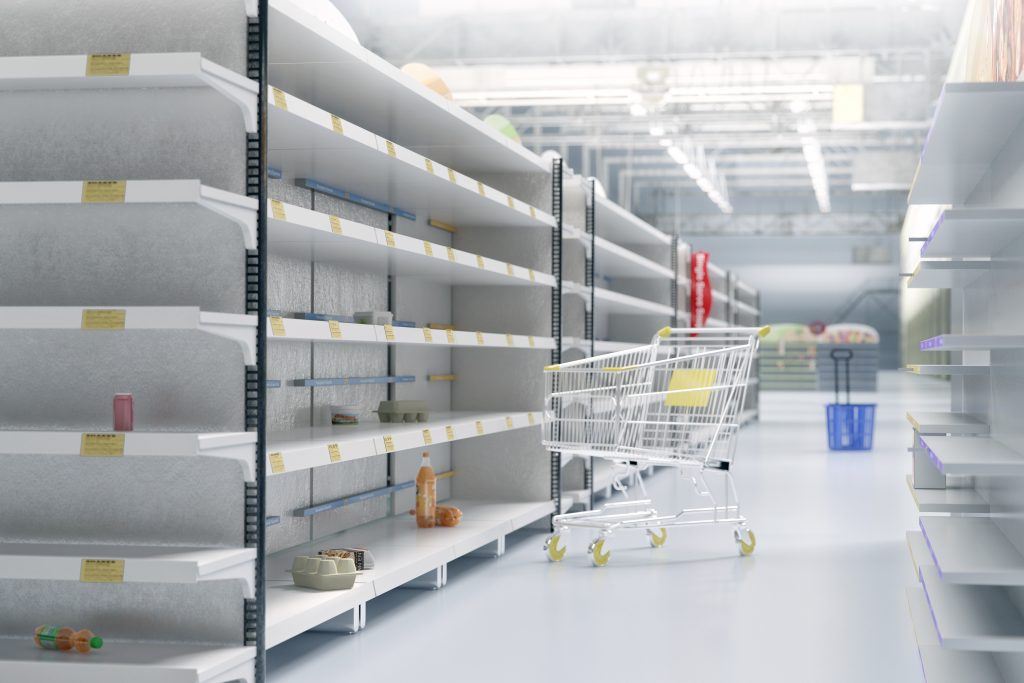 Panic buying, hoarding and taking from those in need

If you’ve visited a grocery store since the global Coronavirus pandemic took hold, you have likely been met with an eerie sight. Barren shelves and masked people have made for an apocalyptic shopping experience. Scenes we’ve all seen – such as those of customers battling over toilet paper – have only spurred on a particularly destructive response to the crisis: panic buying.

While shelves may appear scarce, this panic is not the result of actual product shortages. Rather, the behaviour is driven by the fear of scarcity. And so, fear cause consumerism, and vice versa, as scarcity becomes a self-fulfilling prophecy. This phenomenon has only increased the burden on essential workers and low-income households. Self-isolation has left many jobless. And for those who cannot afford to buy in bulk, hunger looms large. Demand at food banks has trebled in the United Kingdom, and globally it is on the rise too, whilst donations and volunteers have reduced significantly.

Food shortages are not the only pressing concern. Leena, a pharmacy technician at a healthstore in Concord, New Hampshire, describes that she has felt increasingly overwhelmed these past weeks. Like many fellow employees, she says that PPE shortages have forced her to take inappropriate measures. “We don’t have enough face masks to be wearing them at all times. I’ve worked 10-hour shifts back to back and had to reuse the same one, which really defeats the purpose of wearing a mask at all.” The store has experienced its fair share of panicked customers, who are buying inordinate amounts of items such as milk and eggs. Increased demand has led to backlog orders of drugs, namely inhalers and hydroxychloroquine. “People are panic-filling prescriptions for medications, even ones that they have not taken in the past 6 months, even if they don’t need them.”

In the U.S., hysteria has also led to the stockpiling of much more dangerous items: guns and ammunition. Albeit seemingly counterintuitive, arms sales increase following mass shootings and during election years, driven up by the potential legislation of gun control measures. But Coronavirus has resulted in a dramatic spike in firearm and ammunition sales. Following the Trump Administration’s classification of gun stores as essential, these businesses have remained open nationwide. Leena on her commute drives past one such store in Hooksett, New Hampshire, where she observes a curious sight. “Lines of people at the gun store. And they’re not social distancing. People are packed together in a small parking lot.” In March alone, The New York Times reports that Americans purchased 1.9 million guns. As infection cases and death tolls climb, people are losing faith in both the state and federal government’s ability to control the virus, and the consequential threat of civil disorder has pushed many to seek other means of protection.

In the face of growing ‘every man for himself’ attitudes, the selfless side of humanity has risen to challenge this narrative. Gratitude has blossomed for essential workers like Leena, who have been long overlooked but stand to serve their communities at the forefront of a pandemic. And though social media can stir panic, it can also amplify good from around the world. Every day we are humbled by stories of young people shopping for their elderly neighbours. We’ve watched a teacher stand outside a student’s window to work through a difficult mathematics problem. Volunteers are sewing scrubs, and schoolchildren are making visors to protect healthcare workers. These acts of compassion are a testament to the resilience of the human spirit. And you can help too!

One simple and effective way to help vulnerable members of your community is to avoid panic buying. Buy only what you need. Pay attention to shelf labels. Some products are specified by food assistance programs, for example SNAP and WIC in the U.S.. By keeping away from these items, you can ensure that others with limited options have access to what they need to provide a healthy diet for themselves and their families. If you can afford to, help those less fortunate and donate to your local food bank. And if you have the health – and time – join Who is Hussain’s #40Neighbours campaign with a team near you and be part of making a positive difference.