Yesterday, 27th August 2022, saw thousands of volunteers around the world unite as #GlobalBloodHeroes in an ambitious attempt to save up to 150,000 lives through 50,000 individual blood donations.

Countries around the world have been struggling with national blood shortages. Many of the world’s leading health and blood donor organisations partnered with Who is Hussain. These include the Red Cross in several countries, Naryana Health in India, the National Health Service (UK), Vitalant (U.S.A) and l’Établissement français du sang (EFS) in France.

The campaign galvanised many first-time donors around the world, as well as seasoned donors, including Shabir Hussain Khan from India, who made his 179th blood donation. 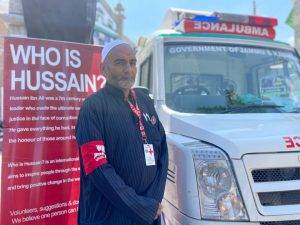 This campaign was part of Who is Hussain’s international bid to break the world record of the most blood donations in a single day. The current record stands at 33,000. The world record will be confirmed by Official World Records, a leading verification body recognised by the Council of Notariats of the European Union. They will authenticate after blood donor organisations confirm how many #GlobalBloodHeroes took part in their respective countries.

Ultimately, with so many taking part on Global Blood Heroes Day, lives have been saved. Just one blood donation can help save three lives.

Muntazir Rai, Director of Who is Hussain said: “Thousands of people around the world responded to the call to be a Global Blood Hero and save lives and beat a world record. Who is Hussain was established to emulate the brave and compassionate legacy of Hussain ibn Ali. On Global Blood Heroes Day, that compassion was clearly demonstrated from all faiths and none. Giving blood donation is a universal act that unites people around the world.”

The campaign generated significant support on social media as well as considerable media coverage. You can catch up on the action on Instagram and Twitter – #GlobalBloodHeroes.