Residents of Flint, Michigan, have faced a major water crisis for the last few years after being exposed to toxic water. However, the crisis hasn’t ended and families are still dependant on water bottles to access clean water. Our Reps in Michigan have launched a crowdfunding campaign to provide continued support.

Residents of Flint, Michigan, have faced a major water crisis for the last few years after being exposed to toxic water. However, the crisis hasn’t ended and families are still dependant on water bottles to access clean water. Our Reps in Michigan have launched a crowdfunding campaign to provide continued support. Click here to contribute towards the crowdfunding campaign.

A brief overview of the Flint Water Crisis

In April 2014, residents of Flint, Michigan, were exposed to water poisoning after Mayor Dayne Walling turned to Flint River as a source of water in a cost-cutting exercise. Originally residents in Flint were accessing clean water from Lake Huron, soon after the switch, residents said the water started to look, smell and taste funny. Tests in February 2015 by the Environmental Protection Agency (EPA) and Virginia Tech indicated dangerous levels of lead in the water at residents’ homes. Over a year after the initial switch, a state of emergency was declared, and hundreds were left without access to clean water.

How our Michigan Reps mobilised to help

Who is Hussain Michigan mobilised in order to assist in any way possible, and in total delivered 30,000 bottles of water to the residents of Flint. We asked our volunteers about the responsibilities they undertook during the crisis and what initiatives were yet to be continued in order to provide the people of Flint with further assistance. 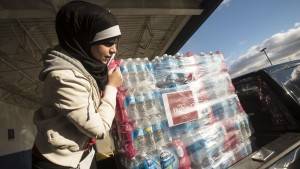 Farwa Haider, Vice President of Who is Hussain Michigan, explained how her team mobilised:

“The Michigan team assembled to deliver aid with hardly any preparation and planning. We gained a lot of media attention from outlets including Washington Post, Huffington Post and more. As the word spread we started receiving many water bottles. Volunteers rented out trucks to deliver the water to the residents of Flint.”

Farwa went on to explain how their effort was received by Flint residents: “The volunteers were welcomed with open arms by the residents of flint at the water drop off locations. The people of Flint felt as if they had been forgotten, but those feelings dissolved as the aid began to arrive.”

The water crisis isn’t over yet…

Unfortunately, the crisis in Flint is not over and many people’s lives have been severely affected by it. Now, our Who is Hussain North America Reps are launching a campaign with a focus to not only donate more water bottles, but aiming to ensure a rehabilitation programme for impacted families is facilitated, and working towards establishing a relationship with “FlintRising” – a coalition of community organisations that have a common goal to help the families of Flint.

Noora Sultan, Head of Who is Hussain North America, says “People have been robbed of their possessions, homes, health, and rights, but above all, and perhaps most distressing, their voices have been stolen. We hope, with YOUR help, we may provide water, essentials, and an effective platform to raise awareness for the people of Flint, Michigan, who have suffered this maltreatment for much too long.”

22nd March is marked internationally as World Water Day by the United Nations, with an aim to spread awareness about the importance of water. Clean water is a basic human right for every individual. At present, it is estimated; 844 million people across the world without access to a clean water (UNICEF), 1 in 9 people do not have access to any water in proximity to their homes (WaterAid), and every minute, a newborn dies from an infection caused by lack of safe water (WHO).