Who is Hussain donates 30,000 bottles of water to aid Michigan crisis

The city of Flint lies on the outskirts of Dearborn, Michigan, in the United States of America. Flint has been suffering from a serious health concern which, for several years, has been falling on deaf ears. After the city’s water sources were changed from the Detroit River to the Flint River, a failure of the use of corrosion inhibitors in the water caused the erosion of water pipes and the subsequent poisoning of thousands of residents.

After President Obama declared the water crisis as a federal state of emergency, the people of Dearborn put their hands together to endeavour to alleviate the water crisis in any way that they could.

As such, representatives of the Who is Hussain campaign in the region reached out to members of the community to aid them. They enlisted the support of schools, neighbours, friends and religious centres in the area. 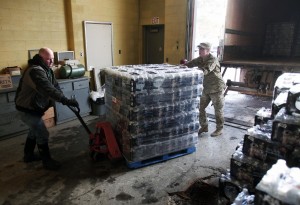 Who is Hussain’s Michigan Team pooled together to donate 30,000 bottles of water to the Red Cross in Michigan. This could only be achieved with the hard work and effort of the community itself and the dedication from volunteers such as Dr Aziza Askari. She says that her team “saw what needed to be done, and we decided to do it.” Who is Hussain allowed for people to donate either cases of water, or to offer payment in kind donations. All cases were distributed by the Red Cross to those who were in dire need of clean drinking water.

Another volunteer, Mohammed Almawla, said: “As a resident of Detroit this is not only a Flint problem – this is a Michigan problem and I feel obligated to help to the best of my ability.”

Who is Hussain’s Michigan team said they were inspired to act by the life and legacy of Hussain ibn Ali. One of the important messages from the life of Hussain is that clean drinking water should be made available to everyone in the world, regardless of religion, race or creed. It is an inalienable right. The history of Hussain’s story talks of how he, his companions and family were killed by their oppressors after being forbidden to drink water for several days. This tragedy made the Flint situation a particularly pressing social issue for volunteers, which needed to be addressed quickly.

The inspirational activities of Dr Askari and the Who is Hussain Michigan team attracted significant media coverage, including from the Washington Times, the Independent and various other American and international media outlets.

Who is Hussain would like to thank all those who participated in this initiative and made this a possibility. Without your help, many hundreds of Flint’s residents may not have had access to clean drinking water.